What is Chlorella?
Species unique to Chikugo strain
Possibility of Chlorella

Chlorella is the source of plants on the earth that contains both chlorophyll a and chlorophyll b.

Chlorella is believed to have been born approximately 2 billion years ago as the “source of life on earth”, but due to its extremely small size, its discovery was in the late 19th century.

The Dutch scientist Beijerinck discovered a small, beautiful green plant that could just about be observed under a microscope in 1890. It was named “chlorella”, by combining the Greek word “chloros” (meaning green) and the Latin word “ella” (meaning small). 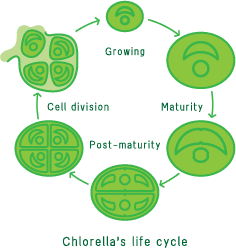 Chlorella is a near- complete-spherical, single-celled green algae that is 3 to 8 μm in diameter, and mainly lives in lakes or rivers. It undergoes photosynthesis for growth. Ordinary animal and plant cells including those of humans multiply through 2 divisions but chlorella repeats cell division at an extraordinary speed of 4 divisions in 20 hours.

Most plants that exist on the earth, including chlorella, have both chlorophyll a and chlorophyll b. Chlorella that is said to have existed since approximately 2 billion years ago is therefore a living organism that can be described as the origin of plants on the earth. 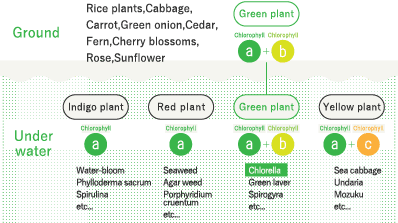 Chlorella is so small that its cannot be seen by the naked eye, but it supports the great numbers of life on the earth by being at the origin of the food chain, in other words the producer. We will introduce such chlorella from a number of view points.

The standard size of CK-5 particles is 8 µm in diameter. If you stack up 3 million particles harvested from the largest outdoor 40 m-sized culture pool vertically, the height will surprisingly reach 24 km! This is a height that is 6 times the height of the world heritage Mount Fuji. 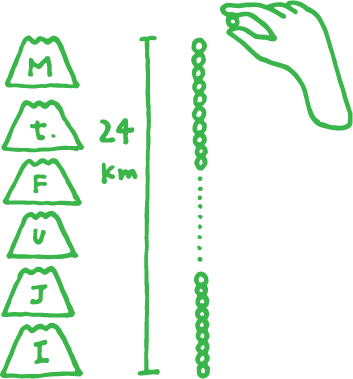 Conversion efficiency is said to be 0.1~0.5% in common terrestrial plants. It may be as high as 4~5% in plants such as rice or sugar cane, but conversion efficiency of state-of-the-art household solar panels only reaches about 15~20%. So, human technology has finally reached chlorella that has been living far before humans evolved on the earth. 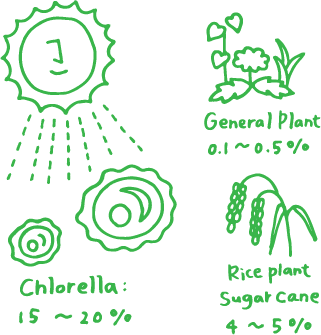 Chlorella supports the life of many species on the earth as the “origin of the food chain=producer” behind the scene. Young cultured fish that grow on rotifer (animal plankton) that feed on chlorella include the Japanese trout (“ayu”), red sea bream, flounder, tiger puffer, and even... tuna. Chlorella is absolutely necessary for the growth of around 70 types of cultured fishes.

The diameter of chlorella is about the same size as the red blood cell in human blood. Of course, it is a microorganism that cannot be seen by the naked eye. If you think of chlorella as being the size of a “one yen coin (2 cm)”, the human being is equivalent to the size of a super-giant that is 10 times the height of the “Tokyo Skytree® (634 m)” ! (1 μm is 1/1,000 of 1 mm).

Although the culture pool appears to be deep as it is dark green in color, you will find that when you put your hand in it, the liquid will not reach your wrist and is actually very shallow. Less sun light will reach as the medium gets deeper. Chlorella receives the maximum amount of sunlight evenly by making the medium in the culture pool shallow, and the pool wide. 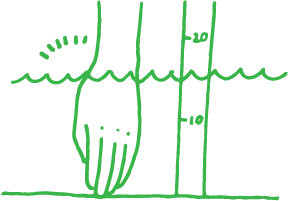